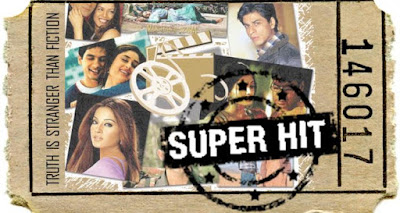 As an ardent cinema follower, I always thought that film making is a field for dreamers, people who create magic through various forms of art such as acting, music, dance etc. Recently my belief was shaken when I came across few alarming facts and figures. Though a film is perceived as a canvas with wonderful colors and an art form nurtured by creative team, however at the back-end it work as a well thought of business project most of the time.
Yes, you heard it right Film making is a strategic business. Every business’s prime motto is to earn profit and film making is no different than any other business. These days, it’s all about number game. Film making has turned into a venture which is webbed around facts and figures and those numbers are quite deceptive for audience to understand. With corporate entering off late in this stream, it became so complex and competitive, that an innocent movie lover or cine goer is not able to understand it and feel cheated when they come out of the theaters after watching a movie which does not holds value for money for them. Most of the times, movies are showcased completely indifferently through tempting teasers, promos, previews and extensive publicity that audience get baffled and then be-fooled ultimately.
Nowadays, it takes only a weekend to decide the fate of a movie. Even an average movie can manage to recover its money or generate profit before any negative publicity through word of mouth manages to do any harm.Whereas, in good olden days, pinnacle of box office glory was used to be the diamond jubilee tag. Diamond Jubilee meant that movie has been played for 75 consecutive weeks. In today’s world producers are mighty pleased even if their films survive second week at the box office.
Below facts and figures is real eye opener. Predominantly in most of the cases an average or just above average movie labeled by renowned film critics has managed to do exceedingly well commercially and have found its place in top ten highest all time Bollywood earners: 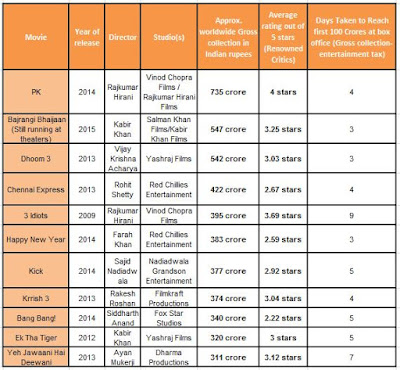 Top ten highest all time earning Bollywood movies
Even on the pretext of being a movie buff myself, from the above table I would not like to revisit more than 1 or 2 movie if given a chance.
Soulful cinema which I and most of the Bollywood lovers want to see again and again finds space in our personal DVD collection or in external hard drives. As we all are living a fast paced life, we hardly find time to even dust the cover of our favorite DVD’s regularly.
Cropping multiplexes, number of prints released globally and strategically selected date of movie release, such as extended weekends due to festivals or national holidays etc., extend towards the box office fate of a movie. In above matrix it’s clearly evident that in mere 3 days to 9 days a movie manages to enter the “100 Crore Club” despite critic’s good/ bad /ugly rating. On the other hand, highly critically acclaimed movies such as “The Lunch Box”, “A Wednesday”, “Udaan”, “Shahid” and many other excellent movies have done an average or no business at box office.
There can be only two reason for this – Either the creative team intentionally decided to stick to the basics of making good cinema and honest to the content or to a large extent possibility is that these movies not able to scale up by enrolling superstars, massive budgets and extensive promotional tactics due to lack of resources.
Following is an example of how a typical Big Budget Bollywood movie shapes up from head to toe, and end up in statistics: 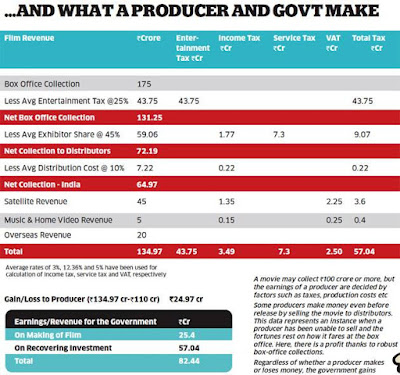 Producers who sell their film out rightly to a studio are equal beneficiaries. To help explain better – Atul Agnihotri, the maker of “Bodyguard”, sold the Salman Khan-starrer to Reliance Entertainment, for a reported Rs 60 crore. Film’s net box-office collection was Rs 148 crore. In such deals, the onus of marketing, movie releasing and thereafter making profits rests solely on the one who buys it. Similar to Atul Agnihotri, Excel Entertainment also played a safe bet by selling “Don 2” to Reliance; Arbaaz Khan managed to strike a similar deal by selling “Dabangg” to Ashtavinayak.
Digital prints have played a significant role as digitization enables bigger releases. Hindi movies have successfully embraced digital prints over analog prints in the past seven years. Digital prints provide producers the flexibility to add or decrease screens according to their availability in real time.
Aggressive marketing has become strategic norm before any release, similar to the practice seen in Hollywood. “Ra.One” is a shining example of this strategy in Bollywood. Film enjoyed the longest and most elaborate marketing campaigns in the history of Indian cinema. Nowadays, even average-budget films are spending lavishly on marketing to gain visibility.
New revenue streams have opened for filmmakers. Cable and satellite rights, for one, are turning to be a cash cow. Producers of big-budget films are able to recover up to 80% of costs even before release by selling the movie to the distributors. “Agent Vinod”, for instance, was a box-office disaster but as it was sold even before release; producers of the movie were able to cushion the financial impact.
Marketing partnerships with foreign tourism boards such as “Zindagi Na Milega Dobara” tied up with Spanish tourist authorities can also offset costs. However, box office screening is still the main contributor with more than 70% of film’s overall revenue coming from it. In Addition to it, satellite, music, home video, overseas rights, new media, digital rights and other smaller revenue streams add to the profit. 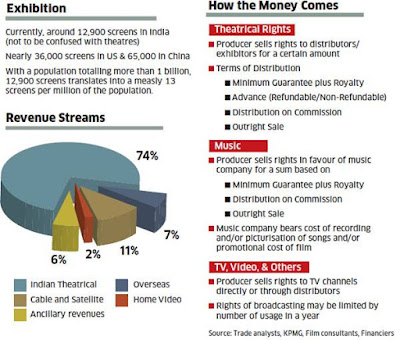 As an audience our focus is merely getting entertained however we certainly don’t able to spend time analyzing beforehand whether it will be worth the entertainment value perceived by us or not and end up getting frustrated most of time.
As a cinema lover, I always lose heart when I see a good movie getting phased out without getting its due share. I hope thinks will not go from bad to worse in future. To keep the motivation high of film makers it is very important that good movies do succeed critically and commercially both. As an audience, we should get many more reasons to celebrate Indian cinema than to repent and our films out shine on a global platform and make us proud.
References use for the data for this article:
wikipedia.org : For movie box office gross collection data
bollymoviereviewz.com/ : For average rating by renowned film critics
economictimes.indiatimes.com : For pictorial diagram

I have been enchanted with silver-screen since I was a child. From release of trailers to watching a
movie, everything excited me. I was always eager to see how a movie turns out and what new I
would find in this land of Cinema.
Over the years it became my passion to share my views about a movie starting from the trailer
launch itself. And as I suspected, my views were mostly echoed by experts of the industry. And that’s
how I started documenting the previews of the movies.
You’ll find my previews one week ahead of the movie launch, capturing my prediction about a
movie. You can leverage my previews before booking a forthcoming movie to see what you can
expect from it. I’m certain you won’t be disappointed. Read More..

Once Upon a Time in Mumbaai