I always believed that the music that touches the soul and evokes deepest emotions of a human being is what lingers on in its true spirit even after decades. Now music in itself is a combination of lot of ingredients, such as lyrics, composition, sounds, instruments, vocals, etc. Most of the times it’s the combination of all that works, however one cannot deny the importance of the “voice” that eventually tickles the soul. Music or no music, a beautiful voice never fails to create its magic.
Since the time I had watched Aashiqui 2, which was the sequel to the 1990 musical blockbuster Aashiqui, a question has been chasing a logical answer for it in my brain. Question is how come a successful singer gives into his addition to alcohol and is unable to fight his way back to his glory? How come he himself believes that he is a failure and cannot sing anymore? For me a good singer is a good singer irrespective of his age. We have live testimony of that in Lata ji, Asha Bhosle and many more.
I understand voice does lose its control a bit over the years; however it’s not like cricket or any other sport where age and physical fitness has a major role to play.
So to resolve this mystery I decided to do some research. Immediately my thought went on to few play back singers whom I admired during 80’s and 90’s, however I rarely heard them in the recent movies. One of those voices that instantaneously crossed my mind was Kumar Shanu. He was one of the play back singer who had ruled 90’s male play back singing and had seen huge success. 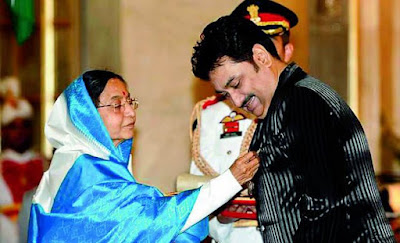 Kumar Sanu getting the Padma Shri award in 2009.
He holds the Guinness Book world record for recording the maximum number of songs in a day, which are 28. For good one decade from 1990 to 2000 he was the voice king who ruled the Bollywood male playback singing. He had won the best male playback singer film fare award for 5 times. He was recently heard in “Dum Laga Ke Haisha” after a long time in one solo song “Tu” and one duet song “Dard Karaara” which was indeed a refreshing experience.
One who ruled the music industry in 90’s was given a tribute through Dum Laga Ke Haisha. In his recent interview’s he talked about the changing industry, music lobbies and why he won’t change. When he was questioned, “You were once the top playback singer. Do you hold a grudge against your audiences, people who forgot about you? He replied – How can I blame the audience for it? People’s tastes haven’t changed. The problem is with the industry and how they manufacture trends and force them on people’s minds. They keep playing a song 40 times a day and they declare it a hit themselves. There are the big lobbies with their own coterie of singers. The scene is polluted. I even know of singers who pay cash and gifts to get offers. What hurt me though, is how the top heroes for whom I used to sing, and in whose success I had a big part to play, forgot me conveniently. I never turned to them for any kind of help.
Udit Narayan’s case is no different; his success was going hand in hand with that of Kumar Sanu in 1990’s. Udit Narayan has sung more than 25,000 songs in more than 34 languages. He had won National Award four times and five time film fare award as best male play back singer. These days Bollywood does spare him some songs,however that too in bits and pieces. No solo song opportunity has knocked Udit Narayan’s door recently. He keeps himself busy singing for regional languages. 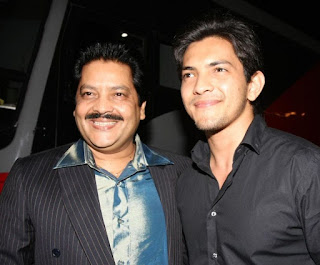 Aditya Narayan and Udit Narayan at Police event Umang-2012
Another name almost entering into this list of forgotten singers is that of Sonu Nigam. Sonu Nigam was used to be a craze once. May it be a pop album or movie song, he was the preferred voice. Almost all the Bollywood music directors were booking him. Nigam’s voice led him to winning many awards, notably for the title song of the filmKal Ho Naa Ho and “Abhi Mujh me Kahin”(Agneepatha-2012). He has recorded romantic, rock, sad and patriotic songs in Hindi, Kannada, Assamese, Bengali, Oriya, Punjabi, Tamil, Telugu, English, Maithili , Bhojpuri, Urdu, Nepali, Chhattisgarhi, Malayalam, Tulu and Marathi. Trend states that in last couple of years songs from his kitty have been replaced with fresh voices.
Irony is that Kumar Sanu, Udit Narayan and Sonu Nigam used to be binding voices of Shahrukh, Salman and Aamir. Though we still see these three actors breaking box office records on each release, those who placed an imperative role in their success in past have now been replaced with new voices. 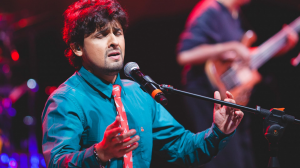 Sonu Nigam Performing in Coke studio
Abhijeet Bhattacharya, Shaan, Kay Kay, Sukhwindher Singh, Babul Supriyo and many more had their share of short fame during this journey as well. We know that the present belongs to fresher voices, yet Bollywood music directors do seldom recall them as per their convenience.
One addition to the list of Golden voices is, Mohit Chauhan. He tasted delayed success as compared to his peers,though that was short spanned too. He was in the limelight for around 5 to 7 years. Soon his silky voice was replaced with that of Arijit Singh.
Mohit Chauhan had his first brush with success with the song “Dooba Dooba” from the band Silk Route’s album Boondhein. Album debuted at number one on the album chart. Boondhein featured songs in Hindi, English, and Pahadi, and the band won several awards at the awards in 1998.
Chauhan’s career in Bollywood began in 2002 when he sang “Pehli Nazar Mein Dari Thi” in the movie Road. His songs “Khoon Chala” and “Masakali” from the films Rang De Basanti and Delhi-6 respectively, composed by Rahman and “Tum Se Hi” from the film Jab We Met, composed by Pritam, were successful.
Arijit singh is current full time active singing sensation, he is in demand and almost all big banners and current renowned music directors are chasing him to lend his voice. Singh has received many awards and honors, including a Filmfare Award, an IIFA Award, a Zee Cine Award and two Screen Awards. He received most awards and nominations for the song “Tum Hi Ho” in Aashiqui 2 (2013); nine awards from ten nominations for this song. Not sure who will replace him sooner or later however currently Arijit is riding high on the horse called success.
As Kumar Sanu quoted in one of his recent interviews, “Today, nearly eight singers are made to sing the same song and you are never sure if yours will end up being used eventually. I have experienced this myself quite a few times.” It is evident that there is major difference that one can see between the ’90s music and that of today.
Some singers have adopted a simple principle that they won’t sing bad songs, songs that require them to scream rather than sing. Kumar Sanu says, “I abhor bad lyrics. Look at the kind of lyrics that are being written — Chaar bottle vodka, Jalebi bai, Munni badnam hui. Such work should be strongly condemned. The offers still keep coming and I keep refusing. I will only sing the kind of songs I’m known for.”
Though we know there is no scarcity of enchanting voices, thanks to ever increasing reality singing shows. These shows keep cropping new voices each year, and keep on forcing them onto the audience. And audiences being victim of self proclaimed blockbusters have no other choice but to accept them.
Ask any fan who enjoyed and 90’s music, they will swear by the voices and would love to hear those golden voices again. Hoping for music directors to create songs that’ll bring back the magic of 90’s and and wish all those singers to croon their way out of oblivion.

I have been enchanted with silver-screen since I was a child. From release of trailers to watching a
movie, everything excited me. I was always eager to see how a movie turns out and what new I
would find in this land of Cinema.
Over the years it became my passion to share my views about a movie starting from the trailer
launch itself. And as I suspected, my views were mostly echoed by experts of the industry. And that’s
how I started documenting the previews of the movies.
You’ll find my previews one week ahead of the movie launch, capturing my prediction about a
movie. You can leverage my previews before booking a forthcoming movie to see what you can
expect from it. I’m certain you won’t be disappointed. Read More..

Once Upon a Time in Mumbaai